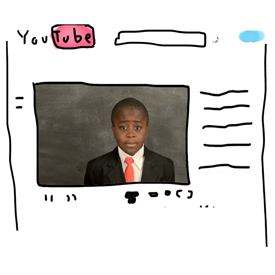 Lately it seems far too easy for folks to get stressed out and overwhelmed. You have many pressing responsibilities at work and at home. For those of you with children, school is beginning again and your calendars are becoming increasingly packed. Reading or watching the news is certain to leave you discouraged and worried. Just last week, my blog touched on a serious subject about something that I never dreamed I would write about: Ebola.

We sure could use some inspiration and encouragement, right? Today, I have decided to share one of my favorite stories with you. It’s about a boy named Robby Novak, who has been diagnosed with steogenesis imperfecta, a disease that makes his bones brittle. Robby has had more than 70 broken bones and 13 surgeries, and has steel rods in both legs. Nevertheless, Robby’s energy, infectious laugh, and positive attitude received much attention when a family member posted a video of him online. The video went viral, and Robby became known as Kid President.

Let’s take a few moments to enjoy some of Kid President’s most inspiring talks:

I hope these messages of inspiration and cuteness brighten your day! Now it’s time for you to get back to being (as Kid President says) awesome!

Thank you to http://kidpres.tumblr.com/ for the image.