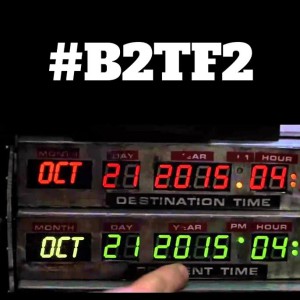 My son, Jason, will turn 30 on Oct 21, 2015, which just happens to be the day Marty McFly (aka Michael J Fox) went to the future in Back to the Future 2.  I started thinking about all the things we thought were going to be invented by now: a flying car, Mr. Fusion, hoverboards . . . so I thought it would be fun to take a look at the movie’s view of the future and see if it came to pass or not.

Jaws 19: Well, we didn’t make it to number 19, thank goodness, but 3D films are definitely here. The film did get it right that we love sequels; Tremors is onto number 5, there are a ton of Friday the 13th movies and I lost count of the Fast and Furious film franchise.

Video Calls: Between Skype, FaceTime and more, yes this has definitely come to pass. I wouldn’t mind having a Jane Jetson morning mask however, if video calls become the norm.

Hoverboards: Maybe? I think we’ve been teased more so than having an actual real functioning hoverboard, as least one that acts as the hoverboard of our imaginations.

Electronics Everywhere: Even though some of the electronics featured in the movie have not yet come to pass, what has is the fact that we are surrounded by and rely on electronics every day.

Self-Lacing Shoes: Another maybe on this one. Back in January 2015 Nike announced that they would be releasing their nod to the Back to the Future 2 Nike shoes featured in the movie. But if they have, I have not seen them. Then again, I am rarely in the market for shoes that lace up and that may be used for running any further than from my car to the mall.

Compost Fuel: This is true for people that are very dedicated to the cause, but not yet commonplace. As well, we are not using anything like a Mr. Fusion, at least not that I am aware of (and I do watch TED Talks).

Flying Cars: Yes they’re here. But most of us cannot afford them. That said, I am not quite sure how you would navigate a parking spot at Target anyway.

Cubs Winning the World Series: Well, it doesn’t look likely right now, but they just might! In the movie, Marty McFly is quite surprised that the Cubs has won the 2015 World Series. And since at this point they have a chance to actually win, well wouldn’t we all be surprised that a movie could deliver on a prediction!

A few other notable, but did not come to pass items are fax machines as a main communication tool (does anyone use fax machines anymore?), the double tie look sported by an older Mary McFly has never come to pass (as if men like tying up one knot, surely they’re not in it for two!) and dehydrated food is definitely not a main way of serving up dinner (thankfully) in today’s world.

So Happy Birthday, Jason! In 1985 I did predict that you would grow up to be a fine young man and this mom was right on with that one!