Cancer to Marathon to Motivation 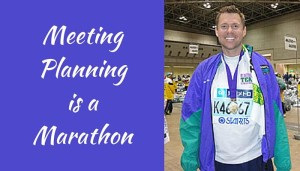 Recently I attended a presentation by Matt Jones and was blown away. There is nothing like a triumphant story to remind us all of how important it is to dig deep, especially during the most trying of times. And some of those stories are just a bit more spectacular than others, here is Matt’s story.

Matt Jones is a three-time cancer survivor. For a time, it seemed that each recovery was followed up by yet another challenge; the final challenge was when a special device that had been placed in his head to treat the cancer became infected. His temperature shot up to 104 degrees and doctors were not hopeful. They alerted family and friends that he may not make it through the night.

He did, thankfully, but when he awoke from the ordeal, things were not the same. Matt shares, “When I woke up I remember looking at my tennis shoes and seeing the laces untied. I knew I was supposed to do something about it, but could not recall what I was to do.” This was the beginning of a long journey to re-learn the most basic of skills; talking, reading and walking.

“When I was learning how to walk again, I decided that I needed to have a goal, something that would let me know I was healthy again. It would take a long time, but that goal was to run a marathon,” says Matt. He made it to this goal one step at time. He explained that after that initial first step, he would then set his next goal; to walk the hospital hallway and back. He continued to increase the distance and time until eventually he came to run not only one marathon, but seven marathons on seven continents! He pretty much exceeded that initial marathon goal an additional six more times!

Though Matt did not classify himself as a runner growing up, and did not begin running until after these life changing events, he has certainly logged a lot of miles since. And this impressive feat has not gone unnoticed. Matt is an exceptional motivational speaker and has been featured in Runner’s World Magazine.

One of the more interesting places that Matt has marathon-ed is in Antarctica. “We ran past penguins!” exclaims Matt. By the way, one does not just catch a flight to Antarctica; instead a plane must be chartered. This journey starts in Chile, where a four-day window of time will be required since there is a very weather-dependent, tight window of time to not only fly into but also land in Antarctica. While in Chile, Matt awaited the call from the pilot, he had to be at the ready, once alerted he had to get to the airport, pass through security and check-in at the gate – pronto.

Once arriving safe in Antarctica, the marathoners must then camp, yes camp, in a sleeping bag that is rated at negative 20 degrees. It’s a bit cold there. Matt actually described the experience as, “always cold,” but at the same time, “awesome.” By the way, 3 days later he flew back to Chile and ran another marathon!

Matt feels that marathons are a great metaphor for meetings, because meeting planners will inevitably hit walls, but rather than stop, they must dig deep and keep going. No matter how well a meeting is planned, things will happen that are beyond anyone’s control, but what you do have control over is attitude. Matt suggests keeping your sense of humor.

One of his mentors, Keith Harrell, who passed away in 2010, often said, “Don’t tighten up, lighten up.” Which Matt most certainly did and does. He shares that while he was in the hospital, the nurses would literally come in and tell him that people were complaining that he was laughing too loud or too much.

Another piece of wisdom Matt shares is another favorite mantra which is, “I’m too blessed to be stressed.” Now this certainly seems like an ideal one for the meeting planner!

Matt is a great choice as a keynote speaker for your next conference. To learn more about Matt and his presentation, visit his website here.

Happy Easter Egg Hunt! Is Your Attendees’ Data Being Compromised?