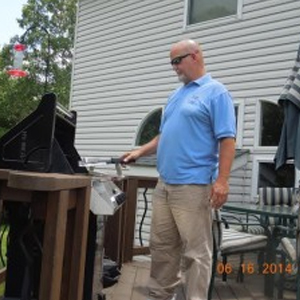 “The story of barbecue is the story of America. Settlers arrive on great unspoiled continent. Discover wondrous riches. Set them on fire and eat them.” Vince Staten, Real Barbecue

This past weekend we celebrated Father’s Day!  My husband is a great father and totally deserves this day of recognition. At many summer celebrations, the BBQ tends to take center stage here in the USA. I am convinced that men enjoy barbecuing due to the sense of danger – fire!

After watching my husband and sons grilling burgers, brats and other favorite fare, I wondered how our world neighbors ‘cue it up. Here is what I found.

Satay: It may sound like a dance or perhaps an exotic silk wearable, but instead it is marinated meat; skewered, grilled and served with a sauce. This BBQ style is found in Indonesia, Thailand, Singapore and throughout the Philippines.

Braai: South Africans cook meat and veggies over wooden embers, never over gas or charcoal.  They like it so much they even have a National Braai Day. FYI, it is pronounced like the beginning of the name Brian, so Bri, not bra.  Just in case you meet a South African, I wouldn’t want you ask them about their National Bra Day!

Lechon: A whole roast pig cooked over charcoal, it’s a big deal in Spain. It is also a lengthy process that can take up to 24 hours, depending on the size of the pig. Ready to try it out? Then prepare well in advance, you may to buy or even build a whole new pit to accomplish this task.  Though I am quite fond of you, please do not invite me to your pig roast 🙂

Yakitori: Usually chicken, but also includes vegetables and beef, this is a type of Japanese barbecue.  It is usually consumed with alcohol, most notably beer. I am quite sure most Americans can relate.

Shrimp on the barbie: This is what Americans think Australians say when they are going to barbecue some shrimp. Upon investigation, I found that this was all started in an advertisement created by Australian Tourism Commission and starring a pre-Crocodile-Dundee Paul Hogan. In the ad he actually says, “I’ll slip an extra shrimp on the Barbie for you.” The word “shrimp” was used to American-ize things since the ad was to be run in the USA. In Australia they tend to use the word “prawns”. So don’t be surprised if you use the term in Australia and the just sort of look at you funny.

Tandoori Chicken: An Indian style of barbecue; it involves roasting chicken in a tandoori, which is a large clay oven.  The marinade used for the chicken is a mixture of plain yogurt with lemon juice and spices like allspice, cayenne, cinnamon, cumin, paprika, garlic and ginger.