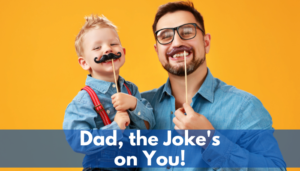 We are soon to celebrate Father’s Day! In honor of fathers everywhere, I would like to turn your attention to the Dad Joke.

Dad jokes are not appreciated by all. Some define a dad joke as “an unoriginal or unfunny joke.” While others describe them as wholesome, which they are! Dad jokes are the kind of jokes you can tell to 8-year-olds.

Dad jokes provide instant gratification. They are clever, disarming, silly and just play fun. Such jokes may very well have been the precursor to the modern-day meme.

Dad jokes are also a great ice breaker. At your next meeting, if you need an engaging way for people to get to each other, suggest they each start with their favorite dad joke. Or include a dad joke on everyone’s name tag – joke on the front and answer on the back – then as they make their way around the room everyone can try to guess each other’s jokes.

Here are a few to share with your dad, or share as a dad, on Father’s Day:

What does a nosey pepper do?

Did you hear about the two TV antennae that go married?

It wasn’t much of a ceremony, but the reception was great!

Why are frogs so happy?

They eat whatever bugs them!

Did you hear about the illegally parked frog?

What does a cow use to carry important legal documents?

What is an astronaut’s favorite key on the keyboard?

Why can’t you give Elsa a balloon?

What do sprinters eat before a big race?

How does the moon cut his hair?

Now it’s your turn. Do you have a hilarious dad joke to share? What was your dad’s favorite joke? If you are a dad, what joke(s) do you tell your kids? Let me know, I am always up for a good Dad Joke!

Meeting Planning 2030 Save Money on Meetings