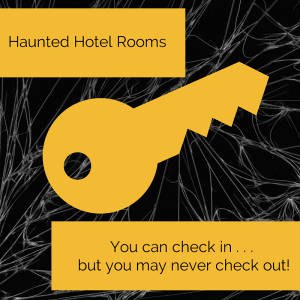 In Halloweens past I have talked about haunted hotels – eeeeek! This year we are going to take a trip and go inside to get a peek into the most haunted within the haunted. If you dare, make sure to ask for the keys to these rooms when you check in (Bwahahaha!).

We’ll begin our haunted tour in Boston at the Omni Parker House. The elevator is said to often travel to the third floor of its own volition. Or could it be that of a stage actress? Or perhaps the businessman who died in room 303? Who can say? What we do know is that there were so many complaints about this room, it was finally turned into a storage closet.

Go west to Wisconsin and check into the Fond du Lac, room 717. Here a man has been heard screaming inside. Guests have reported feeling as if their hair was being pulled, television channels mysteriously changing and lights going on and off. Hmmm, perhaps not the best place to get a good night’s rest.

Head south to Arkansas to the Crescent Hotel. Here you may be privy to the playfulness of Michael, a worker who landed in the place to become room 218 after he fell from the room during construction. Apparently, he likes to make a racket by knocking on walls and messing around with the TV.

A bit further south will take you to Myrtles Plantation in Louisiana. Stay in whichever room you choose, but if you decide to head off to The Game Room you may find yourself playing around with murder (yikes!). Four murders took place in this room and there are tales of a picture that has been caught with bloody handprints and has even unexpectedly flown off the wall.

The Stanley Hotel in Estes, Colorado inspired the King of Horror, Stephen King, to write “The Shining”. People have experienced spooky goings on in rooms 407 and 217, where Stephen spent a frightful night. But it’s room 418 that tops the scary charts according to staff. Numerous times, they’ve experienced and heard reports of ghostly children playing about, at times keeping guests awake all hours of the night.

Brown Palace in Denver, Colorado, is believed to have a high society ghost residing in room 904. Mrs. Louise Crawford Hill lived in that room for 15 years and it is said that made calls to the front desk during hotel renovations, when no one, at least no one alive, was in the room.

A bit further west we end up at Napa River Inn, California. Room 207 is where former owner Captain Albert Hatt, Jr. hung himself. The ghost of his wife has also been seen roaming the halls. Also, doors have been heard opening and closing between this room and its next-door neighbor 208.

Also in California is Madrona Manor. Check into room 101 and you may check out with tales of the ghost of a young girl.

The Queen Anne Hotel in San Francisco was once a girl’s school. Room 410 is named after Mary Lake, who was the headmistress of the school. Apparently she never graduated and is said to haunt that very room.

Wherever you may check in, may you also check out – of the hotel that is. Happy Halloween!