Houston, We Have a Big Game 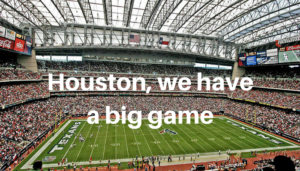 This weekend the big game is on! We know the teams, Falcons vs Patriots. We know we’ll all go Gaga at the halftime show. And we know that we will eat about 1.3 billion chicken wings. But what do we really know about Houston, the city that will host this football game of football games this year? Here are some interesting facts about Houston.

On February 5th, 2 teams will go to battle on the field at NRG Stadium. One will go home with rings and money; I may just go home with shoes.

Ice Ice Baby Be Mine