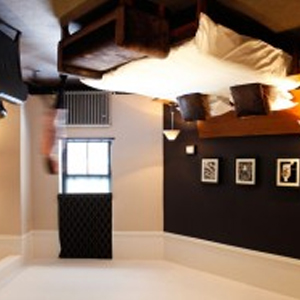 1)   Ode to Salad: Who doesn’t enjoy a good salad?  But apparently someone so loves their leafy greens that they spent years committing this admiration to paper. It “leafs” me wondering if they moved on to soup.

2)   Abe Lincoln Goat: Yes, a goat dressed as Abe Lincoln was once left behind.  Though one must admit that Honest Abe is a stellar look for a goat, I think any other questions should perhaps remain mute.

3)   Upside Down Room: A big name band that was not named, seemed the perfect guests until the room was entered the next day. They spent the evening attaching all the furniture to the ceiling. Did this by any chance show up in a music video?

4)   Mayo Clinic: In a Sydney hotel the guests left behind a bathroom covered in mayo.  Scientific experiment, awesome beauty regimen, who can say?

5)   A Horse, of Course: Imagine a horse being left behind.  I mean, a horse?  I guess he forgot his plane ticket one too many times and the owner was like, “That’s it, I have had it with you forgetting your plane tickets, find your own way back to the stable.”

6)   A Sort of Horse, of Course: Yes, in one room a horse costume was found. Perhaps the owner purchased a new horse costume and could not fit both in their suitcase? Maybe they gave up their whinny ways to pursue another more “stable” career?

7)   Eye Wonder: A glass eye. How do you forget to put in your eye? I mean, doesn’t this just become something you do each day? Much like brushing your teeth or combing your hair?

8)   Leg-o: I understand leaving behind a sock. I would say shoe, but I shutter at the thought of leaving a shoe behind (as shoes, to me, are much like people and need much love and care) But a whole prosthetic leg!  Did the hopping to the elevator not clue them in to their missing something? FYI – this was not found in the same hotel room as the glass eye.

10) It’s Morphin Time: Well, it is as long as you do not forget your Mighty Morphin Power Rangers costume, which this person did.

People are such interesting beings.  If it were left up to me, I would stick with leaving a tip for the housekeeping staff and perhaps the magazine that I have finished reading, but that’s about it.

I received an e-mail from http://www.mentalfloss.com entitled A Goat Never Forgets. So it made me wonder about the “Abe Lincoln” goat that was left in the hotel room that I mentioned on my blog – I’m sure Abe would have remembered to go home so it seems that goats have better memories than humans 🙂 Here’s the link to the Science Daily goat study: http://bit.ly/1dQDr5r. Who do you think remembers better?

I know this is my 3rd post this week & my 2nd additional post about Goats, but who knew there would be so much goat “news” this week? Take a look at this poor #Tampa reporter being chased by, yep! You guessed it – goats!
http://bit.ly/1gxrTsE I wonder if he was so cranky because someone left him behind in a hotel room? What do you think?