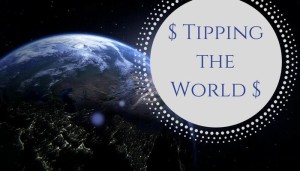 In the USA we tip; we tip wait staff, bartenders, baristas, drivers, hairdressers, hotel staff, dog groomers – if it’s service oriented, it probably calls for a tip. Some services, especially those that work in the tourism and restaurant industries, rely on tips as their income. These folks may only make around $2.50+ an hour, which is not even minimum wage. Some are paid more, but it’s pretty challenging to make a living at $2.50 an hour so tipping is certainly in order.

Interestingly, in some countries, like China and Japan, tipping in restaurants is frowned upon. It may be fine to do so in a higher-level restaurant that caters to westerners, but be sure to check in with your host first. In China, employees have actually lost their job because they accepted a tip. In hotels, however, tipping the staff is completely common.

Here are some other “tips” to know:

For an easy to read world tipping map, check out this page at Business Insider. I found a great tipping cheat sheet on Matador Network.

So That’s How it Works! It’s a Debate