How to Plan the Olympics 101 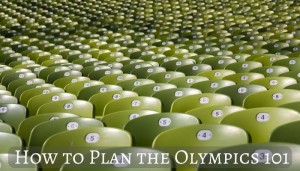 Planning the Olympics is not as difficult as one may think. All you have to do is find an entire city that is willing to host it. And really, the cities usually come running to you, so it’s not like you actually have to go out and find them. Next, book all the hotels in the area. Of course, the host city may have to build some additional hotels, an Olympic village, and perhaps a stadium or park. Make sure to hire a graphic designer to create the mascots and someone who can produce an opening act of some sort (think lots of people, fire, lights, costumes). Toss in a few busses and other forms of transportation so people can get around. Finally, send out an invitation to the various countries and their top amateur athletes. After that, the Olympics pretty much runs itself. LOL!

Of course there is way way more that goes into planning the Olympics, but for you personally, you can plan to enjoy the Olympics and maybe take on a few of their ideas for your next meeting.

Mascots: Over the years, the Olympics have come up with some rather interesting mascots. This year we have Vinicius and Tom. This may be a fun idea for your next conference; mascots can convey information about an area and overall spirit of an event.

Opening Ceremonies: Many events begin with some sort of reception to kick off the meeting. Take a few notes from the Olympics, especially if you have guests from around the globe. Notice that Olympic ceremonies tend to have an international flair and little use of spoken language, but instead use visuals to convey messages and to promote inclusivity. It’s similar to the shows in Las Vegas, which attracts global visitors as well.

Stories: We love to hear the back-stories of the athletes; we learn about all their struggles, challenges and successes. Stories are relatable, and provide for a broader sense of the person behind the sport and medals to be won. A video sharing the story about your company, organization or leadership team is a wonderful way to quickly introduce or update your attendees and guests to who you are, what you do and why you do what you do.

City: The host city is always a star of the Olympics. It’s a great opportunity to show off their area and their people, which usually result in many tourist dollars. Plus, we the viewers love to learn about new places and cultures. Take a note from the Olympics and bring local flavor into your event – do so through entertainment, food, drink and décor.

Awards: Though you may not present medals, recognition to those that make you who you are, that excel within your organization and that give of their time, talent and/or treasure, should be recognized.

Enjoy the Olympics this summer. See you in Rio!